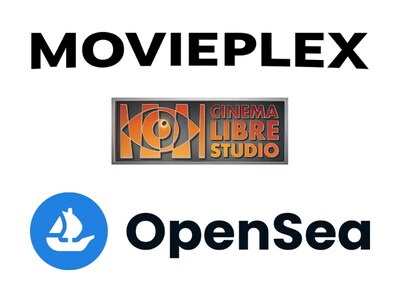 First debuted in May during this year’s Cannes Film Festival/ Marché du Film and initially offered as a collectible limited edition Founder Pack for each movie title.

LOS ANGELES, Jan. 4, 2023 /PRNewswire/ — Movieplex.io and Cinema Libre jointly announced the launch of the Movieplex.io Film Collection on OpenSea (https://www.opensea.io/collection/movieplex-io-film-collection), set for Friday, January 6, 2023. The collection represents the first time in history that feature length films will now be available to collectors as an NFT purchase. The Movieplex platform uses Polygon Blockchain technology on the OpenSea NFT marketplace, making it the first completely decentralized platform and allowing anyone to verify the ownership of each NFT film and creating a new NFT Film category on OpenSea.

“NFTs are the future of film viewing,” said Philippe Diaz, Founder and Chairman of Cinema Libre Studios. “When someone buys a movie on iTunes or Amazon, they only receive a tethered video file. With the NFT, collectors keep an asset which can be resold, while also becoming a part of a community. NFTs create a unique link between the filmmaker and their audience, allowing the buyer to receive subsequent elements that are also part of film distributions – like deleted scenes, interviews with the actors or the director, reviews from festivals, and more.”

Movieplex and Cinema Libre Studio will initially roll out an environmental documentary feature, “Phosfate,” followed by another documentary “Guantanamo Diary Revisited” and a narrative feature, “From Iceland to Eden,” an Icelandic drug crime caper. The remainder of the company’s 100+ film catalog will be available soon after the inaugural release. Cinema Libre Studio has a 30-year history as an independent mini-studio with production, domestic distribution, and international sales divisions.

Movieplex’s technology was developed by founder Garry Dolley and CEO, Frank Ramos. Ramos has worked as a developer in the mobile film and music streaming industry for over a decade. As a mobile developer, he has created technology for the largest film studios, music festivals, brands, and top startups. Dolley has worked in the data center space for over 20 years and has extensive knowledge of media streaming infrastructure, having once served as a director of technology for a business unit of The Walt Disney Company.

“Video content is the ultimate Web3 utility. It’s how the next billion people will experience Web3,” said Frank Ramos.

Headquartered in Austin, Texas with offices in Beverly Hills, California Movieplex.io is a leader in blockchain technology for the Film industry. It is using cutting edge technology on the Polygon blockchain and distributed storage protocols to produce NFTs that contain full length HD Films unlockable on the Movieplex.io website. This is a World’s First for Film. They will be working with Cinema Libre Studio to release a slate of over 100 Films from their catalog.

Headquartered in Burbank, California, Cinema Libre Studio (CLS) is a leader in the production and distribution of independent narratives and social-issue documentary films. Since its inception in 2003, the studio has released over 200 titles and remains at the forefront of the independent film movement by providing the expertise and relationships needed to help filmmakers reach a global audience via all forms of media.

Gryphon Digital Mining, a privately held bitcoin mining company, to merge with Akerna in an all-stock transaction that will advance Gryphon’s leading...

Summary: True Forex Funds introduces itself as a propriety trading firm. Recently, the company has initiated to implement new strategies...